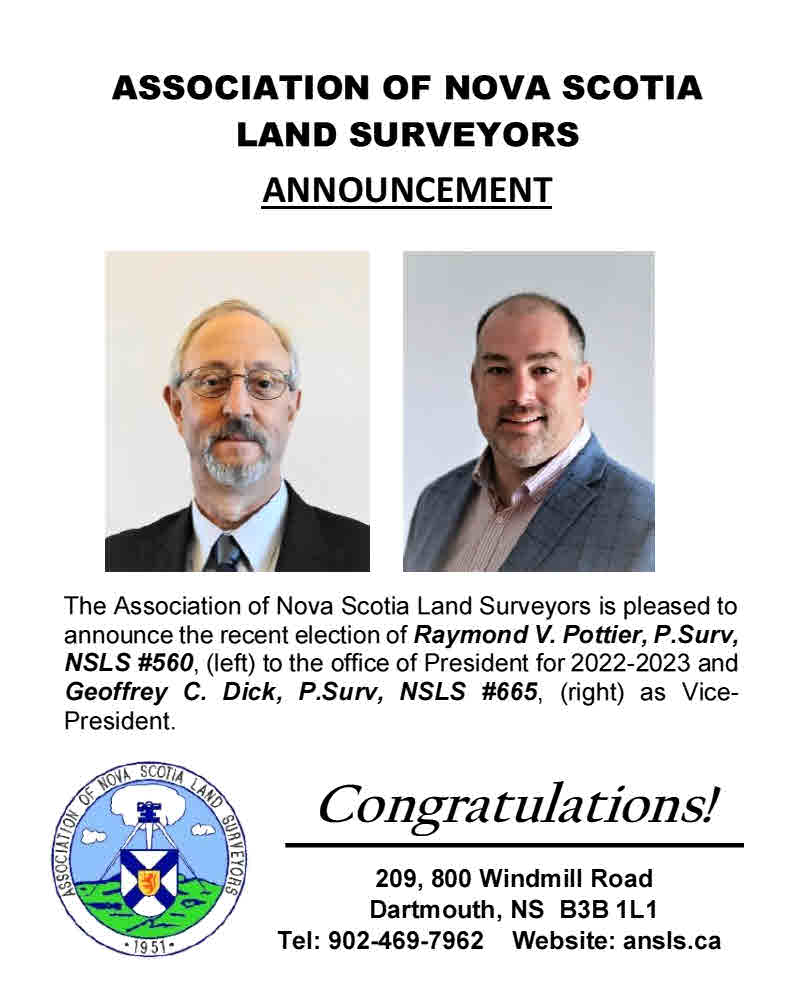 CONGRATULATIONS TO OUR NEWEST MEMBERS! 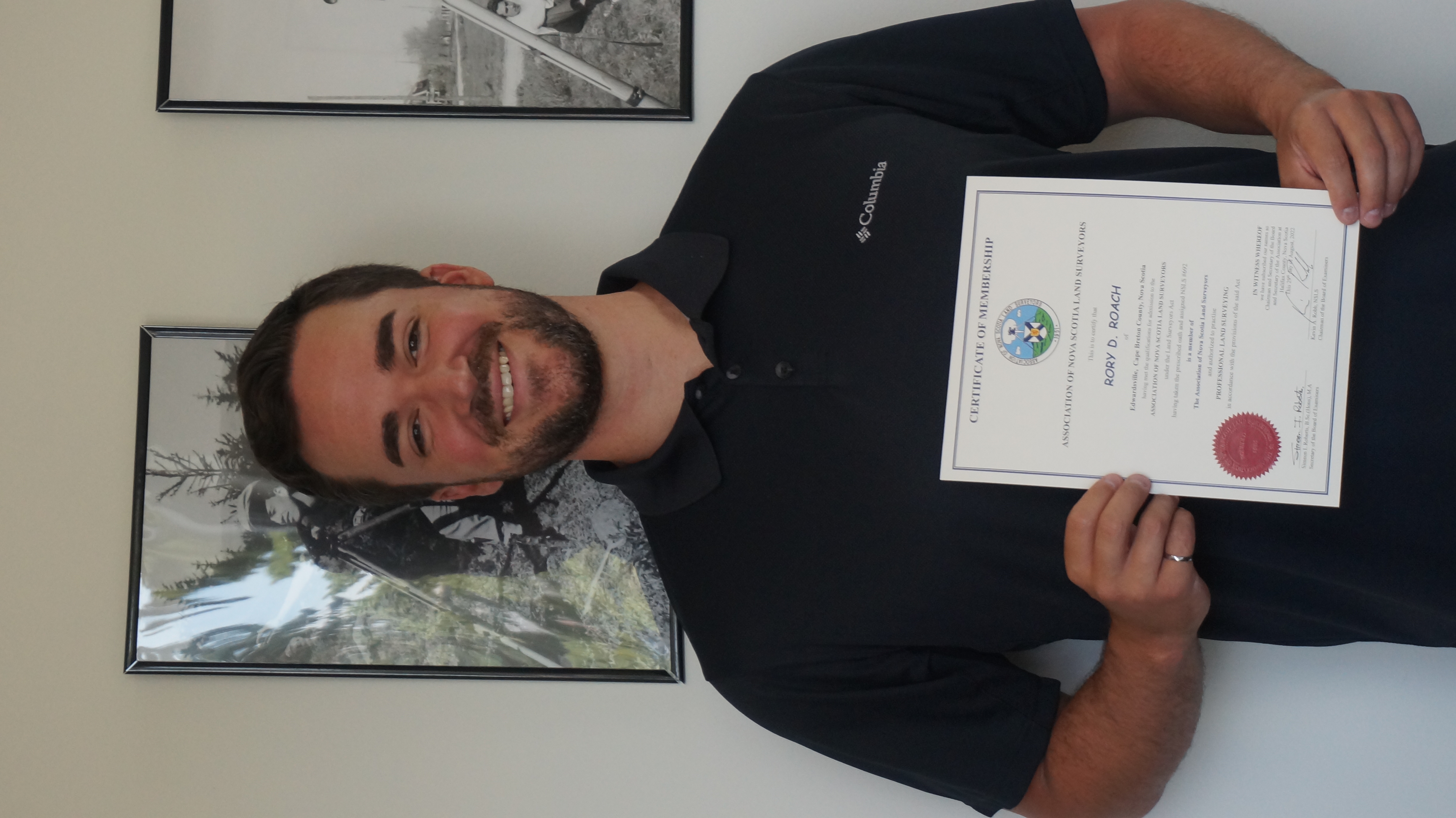 Rory was born in Nanaimo, BC and lived there until he and his family moved to Nova Scotia.  Once in the Maritimes, they lived in Shelburne before moving to Dartmouth where he attended Auburn Drive High School.  After high school, Rory spent several years working at the Halifax Stanfield International Airport.  During this time, he became aware of the Geomatics Engineering Technology diploma that was offered at COGS in Lawrencetown, NS.  After graduation at COGS, along with some working as a Survey Assistant for MMM Group in Calgary, AB, led him to apply to  for his Bachelor of Science in Geomatics Engineering at UNB. While attending UNB, Rory spent his summers in Cape Breton where his family relocated.  During those summers he joined with MacLean Surveying Limited, where he gained lots of experience that helped him throughout his studies.  After graduating from UNB in 2020, Rory moved to Cape Breton permanently and began working for Prendergast Surveys Limited.  Prendergast Surveys gave him the opportunity to be a part of several exciting projects while working toward his NSLS License. 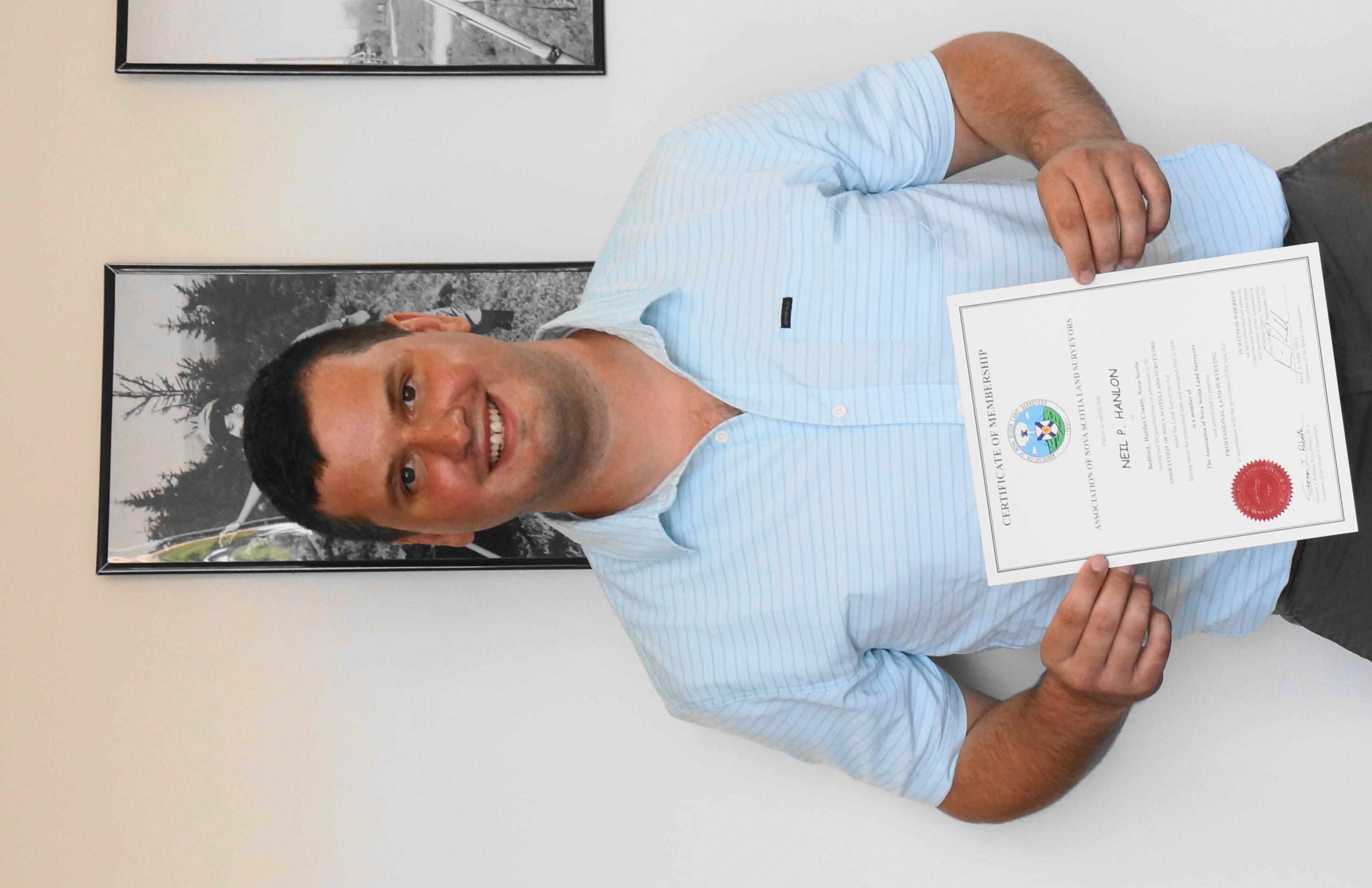 Neil grew up in Linwood, NS.  After graduating from East Antigonish Academy he attended COGS and graduated with a Geomatic Engineering Technology diploma.  He continued his studies and attended UNB where he obtained a Geodesy & Geomatics Engineering degree.  Neil joined later joined with Allison Lands Surveys Ltd. and articled under Michael Allison, NSLS #538 and had the opportunity to work on many surveying projects thoughout central Nova Scotia.  Prior to his current position, he gained experience working on land surveying, construction and engineering projects within HRM and NWT.  He also spent three summers working  with the Dept.t of Natural Resources and Renewables with the Guysborough and St. Peter’s offices.

For public health reasons related to COVID-19, we will be open to the public by appointment only, until further notice.

This book is available at Amazon and other book stores in the Colchester area.  It is also available from the author by calling 902-895-4563.


**Available Courses are now on our Professional Development page.**

The ACLS is holding a webinar.
The Canadian Geodetic Vertical Datum.
December 6, 2022 at 2:00 PM ET.
Click here to register.

IF YOU ARE SEEKING INFORMATION REGARDING THE LAND REGISTRY PROCESS, CLICK HERE FOR THEIR RESOURCE MATERIAL, OR CLICK  HERE FOR THE CLIENT RESOURCE MANUAL.

**To contact a Land Registry office in your area, click here.   Please note the website heading says closed offices, but the office listings are NOT closed.**

*There is public access to some  members files on our Historical Members page.*


Zone Meetings
There are no scheduled meetings at this time.


Able Engineering Services Inc.
is looking for a Land Surveyor for their Annapolis Valley location.   Click here to apply.

PRESENTATIONS
All ANSLS Presentations are available under our Resources Tab, as well as our NSCRS User Guide.

A FREE GeoEd Webinar by the Canadian Geodetic Reference System Committee (CGRSC), available to any Geomatics Professional regarding the Modernization of the North American Reference System.
English  or  French

Here are some Webinar links available from our Surveying Equipment suppliers: